Is Aspartame bad for you?

When it comes to aspartame, one of the most frequently asked questions is: “Is Aspartame bad for you?”.

A fair question considering all the commotion around this food additive. But your average google search may leave you with more questions than answers because of the so called “aspartame controversy“, which has resulted in two groups of people with widely differing opinions on the matter.

But I’m here not to share simple opinions. I’m here to discuss facts, so let’s get right down to it.

On the main page of this website, you can read all about the various mechanisms through which aspartame affects our body and whether they are good or bad. So let’s recap this here:

Out of the 89 sources investigated, 15 research studies found that aspartame MIGHT be linked to a health issue, but could not confirm it, OR aspartame was identified as a secondary factor in affecting an already pre-existing condition. 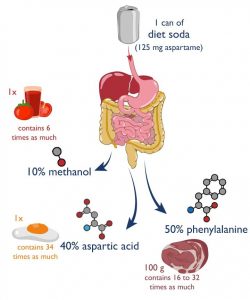 When simple every day foods contain several times more of the same substances aspartame is made of, you stop seeing the danger in it. *credit to bayesianbodybuilding.com

The only potential links that were found between aspartame and health issues revolve around people who suffer from migraines or epilepsy. Those individuals who are diagnosed with epilepsy or chronic migraines, might want to look into avoiding aspartame consumption, as it MAY increase the frequency or duration of those health issues. However, there’s no data to suggest that aspartame is responsible for the emergence of those health problems. So in this context it’s fair to view aspartame as akin to an allergen for these individuals. Perfectly safe for the majority of the population, but can cause some negative side-effects for the susceptible minority.

But to return to the point made earlier, you may have read different articles that do blame aspartame for all kinds of issues. But here is where I suggest you take a deeper look into the “aspartame controversy”, as it has gotten quite out of hand. From the wikipedia page itself, we can read that:

An elaborate health scare, involving a hoax conspiracy theory disseminated on many Internet websites in 1999, attributes a host of deleterious medical effects to aspartame.

The reality is that almost every website on the planet that makes claims about aspartame being dangerous, is basing it on a single hoax letter and sometimes a few animal studies which are equally worthless (you’re not a lab rat, are you?). The hoax become so widely spread and believed, that even one of the more well known American Physicians and radio talk show hosts, Dean Edell had to speak up and try to talk some sense into people:

Beware The E-Mail Hoax: The Evils Of Nutrasweet (Aspartame)

A highly inaccurate “chain letter” is being circulated via e-mail warning the reader of the health dangers of aspartame (Nutrasweet) diet drinks. There is so much scientific untruth in it, it’s scary. Be careful, because others know how to manipulate you by this. Just because something is beyond your comprehension doesn’t mean it is scientific. The e-mail is outrageous enough to state that the Multiple Sclerosis Foundation is suing the FDA for collusion with Monsanto … Bogus, totally bogus. You’ve got to be careful of these Internet hoaxes. When you read health information online, be sure to know the source of the information you are reading, okay?

When you take the topic seriously and read through all the available data on the matter, it’s easy to disprove these hoax letters and websites that claim aspartame is poison. Not a single argument has been made that couldn’t be disproven with simple scientific knowledge and logic. Most of which are covered on the main page of our website.