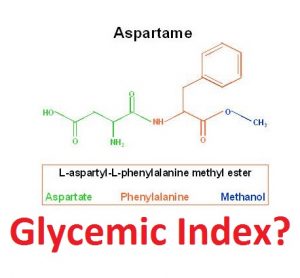 There are many myths and rumours flying about concerning aspartame, so let us put one of them to rest right here. Aspartame Glycemic Index (or GI number) is a flat zero.

That’s right. Aspartame will generally not trigger any sort of increase in blood sugar or insulin, neither on its own or when used in conjunction with other foods.

We conclude that there is no consistent evidence that non-nutrient sweeteners, …have a class effect in modulating blood glucose in healthy human subjects.

That said there may be individual reactions that break this norm, but exceptions are common in human physiology. For the vast majority of the population, Aspartame has an effective GI of 0.

For those that aren’t aware of what GI represents – it’s a numerical system that assigns values to different foods and nutrients based on how strongly they raise our blood sugar after consumption. This can be relevant information for diabetics and for anyone looking to tailor a more specific diet for themselves.

That said, GI is an inherently flawed system because while it measures the GI reactions of different foods, it fails to take into account the fact that the vast majority of meals contain multiple food sources which all interact with one another. Making individual GI’s all but worthless. For example knowing that white bread has a GI of 100 isn’t that helpful when most people aren’t going to consume plain bread. Most will add things like butter or jams or ham, cheese etc. And as more different food sources get added the more complicated it becomes to actually figure out the GI of that meal.

But again, Aspartame Glycemic Index is a flat zero, and so are the GI’s of nearly every artificial sweetener. The simple logic holds sound – when the product doesn’t have calories – it doesn’t spike blood sugar.